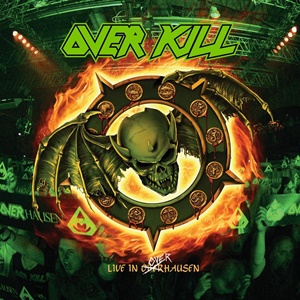 When it comes to Overkill, you know they go all in when presenting a ‘full album in its entirety’ concept. Go big, or go home, right? For the latest Live in Overhausen, that means recording a live double CD/DVD (this site only privy to the audio portion at review time) performing two albums in their entirety for a special German show. The choices this go around would be the band’s fifth studio record Horrorscope – marking their initial transition into a quintet – as well as their debut album Feel the Fire. How certain records age and change can be reflected in that primal live arena – especially with the current Overkill lineup (as bassist D.D. Verni and singer Bobby ‘Blitz’ Ellsworth are the only originals left from that 1985-1991 era when the records originally hit the streets) giving these songs their fresh take and modern attack.

One of the best-selling albums in the Overkill catalog for Horrorscope, they consistently perform cuts like “Coma” and “Thanx for Nothing” to this day – but it’s also refreshing to hear the spooky keyboards that signal the jackhammer rhythms and machine gun snare action within “Bare Bones” and the crunchy riff slaughter for the demolition hammer that is “Nice Day for a Funeral”. You have to love Blitz’s off the cuff stage banter – ‘come on now, don’t disappoint me’ and ‘let’s continue this madness’ as they roll through the deep tracks. For the old-timers first experiencing East Coast thrash metal, Feel the Fire represented a changing of the guard during the mid-1980’s. Beyond the fact that “Rotten to the Core” and “Hammerhead” are set list staples, you get to hear their punk and traditional influences taken to a speed level for “There’s No Tomorrow” as well as D.D.’s bass importance during the title track (referred to sarcastically as ‘the governor of New Jersey’). The intensity, the blazing riffs, the shrieks, the passion – it’s all in there and more as Overkill leave no stone unturned, delivering in spades a once in a lifetime performance over the course of close to two-hours. The audience needs little prompting for requisite chants and background supplementation for singing (check out “Kill At Command” for both), which assuredly pleased the green and black attack from the stage.

Already cracking the creative whip for another studio album in the offing, Overkill has that resiliency that reminds me of Motörhead – they refuse to lose and will stop at nothing to keep releasing quality metal for their global audience to enjoy, headbang, and treasure.