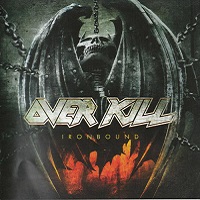 For the last 10 years or so, Overkill has usually elicited the “meh” response to a new album. Frankly, the band has never come anywhere remotely close to touching 1991’s Horrorscope and seemed to be in no rush to do so. Albums like 2003’s Killbox 13 and their most recent, 2007’s Immortalis were workmanlike at best, so when the frothing, brash Ironbound hit our deck, surprises were had all around.

Like other heritage thrash acts making the rounds again (i.e. Exodus, Testament), Overkill has opted for a more modern production, which brings out the collective beast in the band’s tattered thrash template. There’s no shortage of brimming, hard-headed riffing here, and we’ll point to opener “Green And Black,” the raging “Bring Me the Night” (love the solo trade-offs) and album highlight “Give A Little,” which could very well be the band’s best song

At the heart of it all is vocalist Bobby “Blitz” Ellsworth who turns yet another raucous performance. The man (who has beat nose cancer and a stroke onstage) still manages to make his shriek as convincing as ever. “The Goal Is Your Soul” (which in spots, is an homage to Metallica) brings out some nastiness, as does “The Head and Heart.”

More than anything, there is an immense depth to Ironbound, something we usually don’t relate to an Overkill album. It might have been one of those late-career moments where everything clicks again, or maybe the relative line-up stability the band has enjoyed (save for new drummer Ron Lipnicki, ex-Hades) has something to do with. We don’t care. We do care, however, how vital, ready-to-fight, throwdown…you name it Overkill sounds. Ironbound is the early surprise of 2010. A must-have.