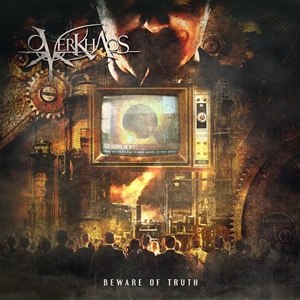 Wishing to supply readers with bio context proves difficult when researching Italian progressive metal band Overkhaos. Be it sparse information at best – or conveyed in their native tongue – guessing is the best this scribe has that they’ve been together since 2013, recorded a demo EP, and performed at a few local festivals to build up their profile to Beware of Truth, their debut full-length. In the end, it’s really all about the songwriting, music, production, and overall final product though, isn’t it? As such, Overkhaos possesses decent qualities to build upon in a diverse scene, capturing the essence of modern progressive metal in 2017.

Nine songs in the main outside of an instrumental “Prelude” opener that flexes those musicianship muscles, you’ll get a sound that traverses 90’s-oriented abilities against occasional pushes for staccato rhythms and screaming/shouting vocals. Not surprising that Symphony X, Dream Theater, and Fates Warning come up on one side, while Pantera, Iced Earth, and maybe Machine Head hedge into the influence tank to tip the scales for aggression and heaviness. Spot on lead breaks give off the bluesy shred meld, while many instrumental sections for “Silent Death” and “White Light” illustrate serious tempo juggling and proper interplay maneuvers. Fierce screams punctuate an aggressive opening segment and verse for “Die Catsaw!” before the progressive atmosphere turns the arrangement upside down, Mimmo D’oronzo using falsetto highs and Ray Alder-like delivery in key spots. A tribal ground swell for “Solar Starvation” quickly segues into a jumpy progressive metal highlight, the drumming twists perfect while the riffing and stop/start rhythms possess current Symphony X girth.

Is everything perfect this early in the band’s career? Of course not. There are occasions where those far reaching influences seem a bit forced and unnecessary, be it almost rap/hardcore like background vocals, the death roars for “The Lie You Need”, or even the Derek Sherinian guest appearance on “Anna’s Song”. When all is said and done, Beware of Truth has enough good to great qualities in terms of versatile ideas and stellar performances to put Overkhaos on many radar screens – especially those who don’t mind the modern/aggressive side careening against conventional progressive metal.