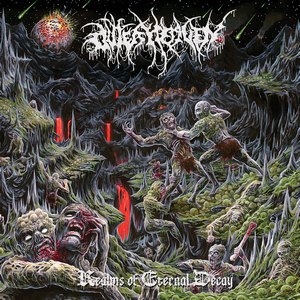 Just when you start to think that death metal is starting to get a bit ‘stuck in the mud,’ due to recent shifts with more retro-flavored and extreme tech releases, there’s a newer act willing to show that straight-up death metal can be timeless and rip just as hard. Outer Heaven have been at this for a few years with an EP and several smaller releases, but they’ve really come into their own on Realms of Eternal Decay.

The premise is simple enough – Outer Heaven isn’t a stretch from other like-minded bruisers like Gatecreeper, and know how to plow through an album with immense brutality and a wink to the elders. But it’s never quite as straight a pathway as one would expect, with some surprisingly technical twists that pop up into the formula at times (see “Pulsating Swarm” for one sly example). But these twists offer only enhancements on a formula that’s already working. The band’s combination of groovy, murky waters invokes brutal reference points (Suffocation) as often as it does Bolt Thrower or Incantation. The grooves are often quite palatable and require little effort to get heads moving (“Echoes from Beyond”) and the combination of catchy and occasionally doomy ensures that similar tempos are never a problem. The songs maintain a brisk pacing too, from the rippers (“Tortured Winds”) to more lumbering efforts (“Sacrificial Evolution”) – all accomplishing their goal of jackhammer heaviness with a high level of clarity and precision. Speaking of heaviness, the overall vibe is filthy, gritty, and organic but allows the more nuanced and technical pieces to stand out when needed. It’s plenty dark and uses the throwback vibes to its advantage without reverting to a lackluster production.

All but certain to be one of the more buzzed bands of the fall in the death metal realm, Outer Heaven hit just about everything one could ask for with this type of material. There’s much to enjoy with Realms of Eternal Decay, but some hints left with a few songs, like “Decaying Realms” lead this scribe to think they are going to deliver something even more devastating in the near future as they continue to toy with their formula.