Out of Hand – Exility (Self-Released) 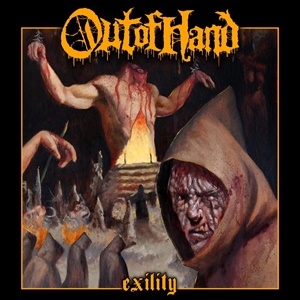 Steadily developing a bubbling mixture of crossover thrash/death metal, Puerto Rico’s Out of Hand wastes little time pushing themselves through the underground since their start in 2018. Releasing two singles and three EP’s over the last three years, they’ve arrived at a debut album for Exility – embracing a fierce, in your face style that traverses influences from the 90’s, 2000’s on through to the current scene. You can expect tight structures that grab your ears, go for the jugular, and often obliterate even when taking the pace down to mid-tempo death/groove levels.

These musicians have no trouble pressing the accelerator to maximum gear as “Weak Willed” illustrates – a punkish outing with plenty of Napalm Death intensity to stir the whip, quick hitting blast measures and ripping growls and barking melodies conjuring evil, aggressive measures. At other times you feel early 90’s UK influences like Bolt Thrower in the mid-paced riff cavalcade that “Petrification” delivers, bassist Joel Rivera assertive in his spitfire, hoarse vocals while the back-and-forth guitar panning during the instrumental sections adds an extra creepiness to the musical landscape. Supplementary sound effects come in and out in specific songs, heightening the subsequent guitar, bass and drum measures – the opening 3:16 instrumental “Exordium” best exemplifying this aspect, the slower, thrash/groove parts perfect for pit moving maneuvers in an early Sacred Reich meets Power Trip meeting of older/newer outlooks. The razor sharp, heads down rhythm guitar action from Omar Gonzalez and Angel Rosado comes from a mixture of thrash and death influences – you can tell these gentlemen love their Slayer as much as Obituary, Death, and the UK scene when listening to blistering outings such as “Condemned to Fail” and the title track, while the dynamic, slow to speedier side for Out of Hand comes into play on closer “Creatures in Distress”.

Retro influences put together in a youthful, energetic package – Exility has plenty of crossover thrash/death appeal for those underground maniacs who enjoy the seesaw musical shifts and dual roar/growl vocal components that this band build out.