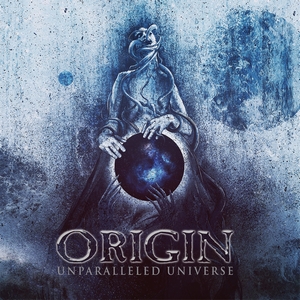 When one comes to think of Origin, it’s easy to immediately jump to what they do best – play uber-technical material at more or less inhuman speeds. They are the type of band that can simply take your breath away and make your jaw hit the floor from the sheer brutality of it. For the band’s seventh release (as we saw hints of in Omnipresent), they do some sonic expansion outside of the ‘blow your head off with speed’ approach, and it’s a move that pays off massively.

As we’ve clearly stated above, Origin has always been impressive in their near-inhuman abilities. To that end, Unparalleled Universe starts off in the usual shining fashion – “Infinitesimal to the Infinite” is everything you’d come to expect and love about the band in an explosive two-minutes. Gorgeously intricate riffing done at light-speed and glowing precision, without sacrificing brutality. “Accident and Error” and “The Soothsayer” continue this grand tradition at other points of the album and it’s safe to say they’ll be easy favorites for the Origin veterans.

But what’s also interesting are a few different left-turns the band takes this time. “Invariance Under Transformation” is a slow, groovy monster that focuses the band’s energy into providing some noticeably dark and heavy riffs that are bound to induce a bounty of sore necks. “Dajjal” introduces some rather playful guitar noodling that moves into a catchy progressive lick before the band catapults back into ludicrous speed. The belle of the ball has to be that of the 10-minute “Unequivocal,” which starts off in more familiar territory, albeit a bit catchier in the riff end. The second half of the song is where the band reaches into the prog sector and finishes it off with some surprisingly glorious riffing and melodies. Some of the most overtly catchy material the band has done, but it’s not out of place. They finish the album off with a cover of Brujeria’s “Revolucion” that is given the Origin treatment (along with a little US flavor through a Star Spangled Banner and Trump snippet to start).

Origin continues to lead the way when it comes to all-out tech brutalilty. Unparalleled Universe is the work of veteran masters who grasp what can and can’t work within their music, and still feel hungry to the point where they are willing to experiment a bit. That’s a combination that’s tough to beat.