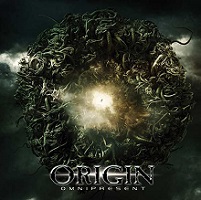 The times in which Origin have gone overboard…totally understandable. It’s a never-ending survival of the fittest in technical death metal; i.e., let’s see how far we can push this thing in hopes no one else can catch up. Inevitably, someone always catches up, it’s just a matter of getting out the gate first and having a reputation in which to ride, something Origin has. Their 2011 Entity had its fair share of inhuman moments, which clearly served their purpose, for Omnipresent is a more controlled, yet no less intimidating Origin.

The obvious change starts in the vocalist spot, where Jason Keyser (ex-Skinless) has assumed duties in place of the two-headed Paul Ryan and Mike Flores approach. And Keyser is fine, totally within his limits, doing his best to keep up with what is going on, although to reiterate – he doesn’t have to wind himself as one would initially think. The chunky, John Longstreth-dominated “Manifest Desolate” gets the first nod as one of the album’s standout cuts, a veritable clinic by the drummer, if anything. The speed gets its time on the excellent “The Absurdity of What I Am,” as well as “Unattainable Zero,” where upon Ryan inches ever closer to full-time carpal tunnel syndrome.

Traditional Origin fare aside, the almost old-school “Redistribution of Filth” is a cool slab of no-frills DM; Ryan’s short instrumental “Continuum” is a wise choice to split the track listing down the middle, and the multi-faceted “The Indiscriminate” provides a rollicking back-and-forth between grueling extremity and seasoned brutality.

As has proven to be the case for Origin post-Relapse, they’re awfully attuned to what floats and what doesn’t in the context of utterly extreme death metal. Omnipresent just inches over the 34-minute mark (they even did a cover of S.O.D.’s “Kill Yourself”), thus preventing the all-too-common overload of the senses. Rather, Origin picks the right spots in which to do these things, supplementing the notion that if there was a fuck-all extreme technical death metal band to point to in 2014, it would be them.