Organosyde – Kvlt of the Ziox (Self-Released) 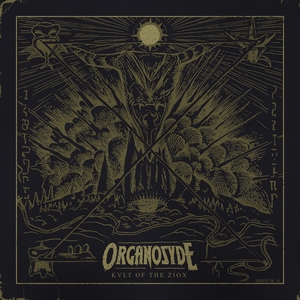 With the sheer amount of HM-2 inspired death metal out there currently, some people are bound to get fatigued by it. It gets to the point where one begins to wonder why anyone should care about yet another band like this. There’s a sea of uninspired stuff out there. But Organosyde are not cut from that cloth. When you see the folks involved are Greg Burgess (Allegaeon), Shane Howard (Martriden), Erik Brown (Nekrogoblikon), and Ken Sarafin (ex-Vale of Pnath), it should be enough to grab your attention.

Rather than simply relying on the coattails of being to toss around their other bands as selling points, Kvlt of the Ziok decides to take the best parts of the genre and run with them. There has to be an inherent fun factor to a release of this stature, and Organosyde are all over it (not a bad start with a beer can opening at the beginning of the EP). Each of the five tracks ooze that HM-2 buzzsaw and toss it into riffs that are both meaty and entertaining. They grab you with the chunky mid-tempo grooves and essentially induce headbanging. All five tracks are really consistent with this. Some catchy leads and melodies also find their way in (“Tides of Apocalypse” seems the early winner here) for the sake of variety, and match well with the vocals to that end. Shane Howard’s vocals are massive and hit the growling needed for this style, but also expand out to include a wider girth of shouts and screams that are just as intense as the music behind them.

While it’s a somewhat small first taste, it’s easy to really listen to Kvlt of the Ziox a few times without pause or restraint. The music is engaging and fun – arguably the most important factors with the old school death metal influences (that, and the super crisp production/mastering accomplished by Shane Howard and Dave Otero respectively). Organosyde take you back to that golden age of death metal with a smile on your face (and probably a beer in your hand) without feeling like an imitation nostalgia act.