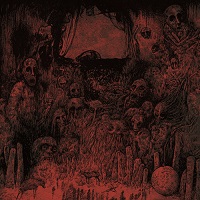 The second killer black metal album to be released by the Eisenwald label (the first being Aurvandil’s immaculate Yearning), Ordo Obsidium’s Orbis Tertius travels down the icy slope of melodic black metal, American-style. However, this isn’t a typical Yankee-Doodle basement black metal affair; Orbis Tertius is rich with deliberate nods to mid-90’s black metal (i.e. Emperor, Satyricon, etc.), as well as suicide-watch doom reminiscent of when Katatonia was capturing tears in a vial on Dance of December Souls and Brave Murder Day. Odd that no one has gone this route more…

Like the current swath of American black metal bands

(Wolves In the Throne Room, Krallice, etc.), Ordo Obsidium keeps the production values at their most crisp. Thankfully, there’s no backwash of buried drums and frazzled distortion, allowing the band’s mind-melting riff sequences to take full shape on opener “Nequaquam Vacuum.” Similarly, the band pedals through a Krallice-like landscape on “Into the Gates of Madness,” essentially employing the same chord movements as the New York black metallers tend to do so often. No harm, no foul.

The album (which runs at a tidy five songs

) kicks into full-gear once the title track hits. Here, forlorn melodic passages run with the tide of OO’s emphatic black metal thrust, going from mysterious doom segues, into an onslaught of pointy melodies. Album highlight “Emptiness Under the Moon” takes this even further, emptying its melodic round over the course of a 9-minute-plus USBM tour de force that fails to tire.

Orbis Tertius allows Ordo Obsidium to make a triumvirate of American black metal with the aforementioned Krallice and Wolves In the Throne Room. Better yet, it speeds past both Diotma (Krallice) and Celestial Lineage (WITTR), en route to becoming one of the year’s true black metal gems. Get this.