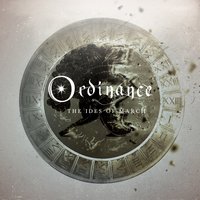 Back in 2011, Ordinance unleashed their first album, Internal Monologues, but despite its progressive death metal goodness, it failed to generate as much hype as it should have. Since that time though, its members have become much more well-known – particularly Mike Semesky (Raunchy, Rest Among Ruins) and Alex Rüdinger (Conquering Dystopia, Good Tiger). With their ambitious sophomore album, The Ides of March, it seems the band should get their due credit.

Like Semesky’s last project (the excellent Rest Among Ruins’ Fugue), The Ides of March is a lengthy concept album. If the album title didn’t clarify things, the concept at hand is that of Julius Caesar’s assassination. Each song focuses on a different person/group, ranging from Caesar himself to Marc Antony, Calpurnia, the Libertores, and Cicero, among others. This allows the band to cast a wide array of influences over the course of the album without it sounding out of place or rote. Both musically and vocally, Ordinance feels no need to play by the rules. The band can switch from blast beats and menacing growls to an elaborate and progressive solo to an ultra-melodic chorus on a dime. Just check out highlight “Silent Senate” and chance are that you’ll be hooked. On the more progressive side of things, “Heir Avid” pulls some Opeth-esque moments after a rather brutal beginning, complete with some acoustics and melodic guitar leads. But those looking for something a bit more uncompromising will get a kick out of “Remedy,” which pushes death metal first and foremost, with just enough melody to keep it interesting.

The musicianship is top-notch from beginning to end, and the lyrical concepts are just as strong. After Semesky’s impressive work on Fugue, it’s no surprise, but the way that everything is incorporated into the storyline is extraordinarily well done and worth taking the time to thoroughly investigate. Semesky also gets to flex a bit more on the extreme side than with say, Rest Among Ruins and Raunchy, and makes the switch-ups between the extreme and clean vocals all the more impressive.

Impressive all around, The Ides of March is an album that will keep you listening intently for its entire 64-minute runtime. The progressive melodies bring balance to the more extreme riffing, and Semesky’s vocal range and lyrical concept is the icing on the cake.