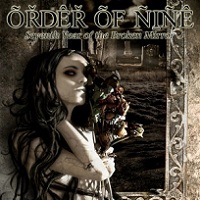 Beginning as Templar in the late 90’s, I fortunately got to know this group’s brand of powerful dark progressive metal during the Powermad Festival days when meeting vocalist Michael DeGrena in between sets. Changing their name to Order of Nine, through the 2000’s they’ve recorded a series of albums, appeared on a couple of Queensryche and Black Sabbath tribute albums, and now move into their fifth studio album with Seventh Year of the Broken Mirror, an 11 song

, 63-minute recording that should appeal to those who love minor chords and dynamic twists in their metal efforts.

The sextet uses a guitar/keyboard framework in a down-tuned manner, once again conveying a heavier 80’s-meets-early 90’s spirit through songs like the twin guitar-prominent “Spiral Staircase” which evokes early Savatage meets Sanctuary. The galloping follow-up “Changing of the Guard” brings up Nevermore’s heaviness against Iced Earth’s triplet rifle attack. As a singer

DeGrena prefers to explore the outer reaches of his middle and low register – comparisons for Lou Falco from Wicked Maraya, the late Pete Steele of Type O Negative as well as Geoff Tate come to mind on “Eye of the Enemy” and the sinister title cut.

Overall, Order of Nine appeal to me because they aren’t afraid to use a wide spectrum of influences from the North American and European power/progressive scene to create their own template style

. The virtuoso moments aren’t mere shred fodder – this band understands that ultimate retainable songwriting ensures longevity, and Seventh Year of the Broken Mirror delivers in spades. Picks to click: the Evergrey-esque “Words That Were Said” with its spider-like guitar parts and fiery “Reign Down” that 80’s maniacs live for.