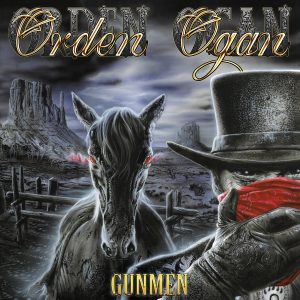 Transforming from folk metal roots to power/symphonic laden glory, Orden Ogan took a love of choir-laden choruses and larger-than-life guitar harmonies all the way to headlining status (at least on European shores). Previous albums like Easton Hope and 2012’s To The End (a year end top ten effort to this writer) catapulted the Germans as the future pioneers for the genre, taking Blind Guardian and Running Wild to heavier, bigger sonic levels – almost subscribing to a ‘more is indeed more’ philosophy. The follow up Ravenhead explored some of the mid-tempo/grey areas which are necessary for longevity, bringing us to this sixth studio album Gunmen.

The gallivanting guitar gallop from Seeb Levermann and Tobin Kersting bursts forth like a battering ram, making “Vampire in Ghost Town” and the wild-western ambiance throughout opener “Gunman” two songs sure to appease even casual Orden Ogan followers. The circular return to the main musical hook through keyboards at first and then different mutations guitar-wise should also be noted to make the latter cut the obvious first single – it’s quite the charmer to rattle around the brain matter for sure. When the band needs to just go for power and heaviness, it’s nice to hear things very potent as they are in “Forlorn and Forsaken”, especially during the verses or instrumental breakdown where you could imagine audiences spasming beyond belief. The folk feel comes through during the choir vocal melodies of “Ashen Rain”, while the follow up “Down Here (Wanted: Dead or Alive)” pushes the band musically to bombastic/fanfare levels, conjuring visions for a renaissance faire or fantasy battle sequence in your favorite role playing video game.

Limiting the guest appearances this time to Liv Kristine (ex-Leaves’ Eyes/Theatre of Tragedy) for a vocal assist on “Come With Me to the Other Side”, it may appear to be a ballad from it’s opening acoustic guitar and low keyboard passage, but soon enough the Dirk Mever-Berhorn drum salvo and crunchy/speed guitar action brings the number up to power metal traditional bliss. Seeb is a master behind the boards – dare to say his insight into harmonization, texture, dynamics, and knowing when to let things breathe and when to go full force could put him in league with a rock pioneer like Tom Scholz from Boston. Normally records that almost hit that hour mark lose momentum because of too much sameness – Gunmen leaves enough twin guitar octane burst in the tank through the almost nine-minute “Finis Coronat Opus” as the drums and guitar notes fade away to make return engagements mandatory.

Let’s hope serious North American traction occurs so that the band can move beyond festival one-offs into the land of full tours, as we need more Orden Ogan on these shores. 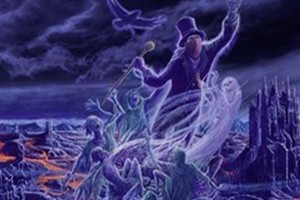