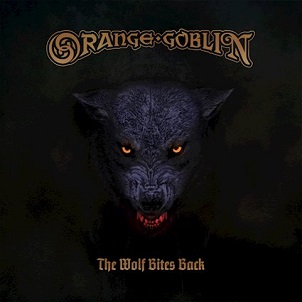 Orange Goblin’s evolution from thick-bearded stoner rockers to a burly, thunderous metallic ensemble is certainly commendable. Look at it this way: When a certain segment of bands has gone one way (back to the ’70s or Mastodon-ville), Ben Ward and gang have gone the other, straight to the heart of what best could be described as “meat and potatoes” man-metal. Being steadfast has such comes with rewards, in particular, reliable, hard-charging albums to lay claim to, notably, 2012’s A Eulogy for the Damned, 2014’s Back from the Abyss and now, The Wolf Bites Back.

Album opener “Sons of Salem” is the utterly necessary hard-charger to kick things off properly, as Orange Goblin (who, in addition to vocalist Ward, are rounded out by guitarist Joe Hoare, bassist Martyn Millard and drummer Chris Turner) mows ‘em down, like a pack of bikers chasing after some bloke who thought it was a good idea to push over their bikes outside of the pub. That kind of thing. The revved-up title track, along with the Sabbath stomp of “Swords of Fire” are perfunctory and just naturally heavy; no-frills or additives needed to push them along any further, really. But then again, we’ll lung at the twang of “Ghosts of the Primitives,” melodically-inviting instrumental “In Bocca Al Lupo” and country, backwoods romp of “The Stranger” as the real differentiators here. Orange Goblin has more variety in their sacks than they’re given credit for.

Somewhat easy to see Orange Goblin like a British Corrosion of Conformity. Both are pretty much separated simply by their ability to swing for the Sabbath fences without sounding like a cheap knock-off. And like C.O.C., there’s more than meets the eye with Orange Goblin. On The Wolf Bites Back, the Brits provide more substance and style than any Johnny-come-lately ever could.