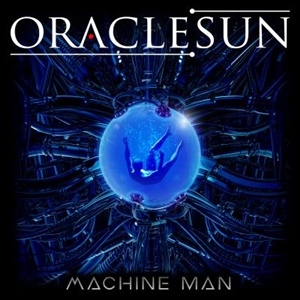 Although it’s been fifteen years between albums, there are natural events (and one tragic) that led to the delay of the second full-length Machine Man from Italian power/progressive metal band Oracle Sun. Three of the members split after the 2005 debut Deep Inside to work on other projects – gaining new members by the early 2010’s, the unfortunate passing of guitarist Vic Mazzoni in 2016 put another delay in the mix. Finally becoming active again in 2018 and adding guitarist Giacomo Paradiso to the fold, the sextet appears ready to pick up momentum while overcoming all the obstacles placed before them.

Throughout the nine songs you can expect a fairly European power approach with progressive and traditional accents – dual guitars and keyboard flourishes hand in hand along with a rhythm section that can settle into some solid grooves yet flex some technical prowess and active signature moves when they want to. Drummer Frank Andiver keeps up with the circular riffs as bassist Alessandro Cola flex some lead ethics during “Million to Ascension” with Iron Maiden/Rush spotlights coming to mind, the main axe break throwing in a shred/spacey vibe. These musicians understand restraint and building emotional character – laying down thick harmony ethics in “Fallin’ Time”, a commercial-oriented effort where the verses take in more of a lighter AOR-aspect before the energy picks up for the infectious chorus, Wild Steel using broader strokes of his lower to higher vocal range. Acoustic guitars and piano form a symbiotic, classical touch to the start of “Look Behind Me” – a power ballad that escalates with emotional resonance due to the dramatic vocal delivery plus proper diverse rhythm section support. The Visions-like Stratovarius climbing feel for “Daydream” is a second half highlight, the pulsating keyboards, guitars, and tempo locking in for probable devil horns approval.

Many will find Wild Steel’s voice hit or miss though. It’s not that he doesn’t possess the skills to be a great power/progressive vocalist. There’s just a strained and accented aspect to certain words and melodies that aren’t reaching the Michelle Luppi or Fabio Lione level of professionalism, and that could put Oracle Sun in more of a solid but not outstanding category. If you enjoy Italian power metal with more of a mid-tempo, American progressive slant – Machine Man could hit that aural button for your preferences.