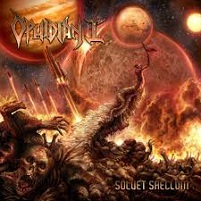 The left-turn The Faceless made on their new album rocked the technical death metal world. Such a lazy pun is necessary here, only because of the divide it has created, spawning tension between those who wish Michael Keene and friends would still harbor solely on their vast technical repertoire, and the portion who are intrigued by the “progressive” angles the band took. It makes one ponder how Death would fare in this climate, especially since Chuck was gradually shifting toward more melodic avenues (see Control Denied). Given the man’s legendary distaste for detractors and rumor-mongers, he would have gone to battle with keyboard ninjas at the drop of a hat…

Iceland’s Ophidian I appear poised to soften the blow left by The Faceless, emerging as a potential figurehead in the sub-genre’s development on theirSolvet Saeclum. They’re more Necrophagist than Sumerian Records, and those who are familiar with the current happenings in technical death metal, understand the difference. The five-piece prove to be fundamentally sound from the get-go, as album opener “Mark of an Obsidian” bristles with Obscura-like precision, with fluid guitar

lines popping in and out. Bass player Porour ends up stealing the show, overshadowing what is largely top-notch guitar work (the dexterity on “Zone of Alienation” gets a thumbs-up), with a bass solo spot on “Eclipse” that turns into the album’s defining moment.

Death metal has a tendency to favor bands

from exotic locales (see: Decapitated, Psycroptic, etc.), so the band’s Icelandic homebase should add to their allure. Beyond that, Solvet Saelclum is an ultra-promising debut, stocked with the sort of elements that have made all comers drawn to the style’s headliners. If the band can get out of Iceland and onto the international scene, then the technical death metal scene will be better for it.