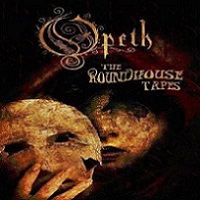 In the live setting, Opeth are pretty stationary, but man, that Mikael Akerfeldt sure is a hoot on the mic! But no, seriously, the band can faithfully recreate their deep and often challenging brand of progressive death metal without a problem and that alone, is another pile of praise worth being heaped upon the band. Visually, in DVD

format, the band doesn’t quite come across as captivating.

The visual version of the same 2006 London show

at the Roundhouse in London, The Roundhouse Tapes is the last shot of now-departed guitarist Peter Lindgren and knowing what we know now, his disinterest on stage is painfully evident. Nevertheless, Opeth rolls through a set that touches upon every one of their studio albums, with a few surprises.

”When,” off 1998’s killer My Arms, Your Hearse starts thing off and still sounds as menacing and haunting as ever. The grueling “Ghost of Perdition” and classic “Under the Weeping Moon” get quality air time, as does the lovely “Face of Melinda” and “Windowpane.”

Hats off to then-new drummer Martin Axenrot, who had the dubious task of latching onto an Opeth back catalog that is anything but easy. His work on “Blackwater Park” is especially agile. Mandatory set number “Demon of the Fall” also gets a workout from Axenrot and provoked the largest crowd reaction of the night.

Visually, Opeth aren’t much to look at. Lindgren is in one spot. So is bassist Martin Mendez. Keyboardist Per Wiberg is perched behind his stand, so that leaves Akerfeldt to provide some cool interaction and he’s just too damn tied up in singing

and strumming to do so. Understood.

Little in terms of extras outside of a band interview and soundcheck, so toss this one up to a purchase mandatory of Opeth diehards, which there are rightfully many of.