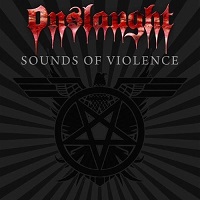 Doors aren’t exactly being kicked down over the prospect of Onslaught’s second post-reformation effort, Sounds of Violence. The Brits have always done a good job of blending into the thrash scenery, even if 1986’s The Force had the necessary spunk and guitar-wielding junk to at least nip at the heels of their American counterparts. For Onslaught circa 2011, Sounds of Violence is suitably workmanlike, although methinks this could be an album that will eventually sneak into the psyche of the thrash brethren in due time.

Like 2007’s comeback Killing Peace, Sounds of Violence is a snappy collection of retro thrash, paired with accessible song structures and the always healthy bark of singer Sy Keeler, who is still probably the best thing about the band. Along with the now-deceased Gus Chambers (ex Grip Inc.), Keeler has one of the more discernable, yet angry thrash voices, as displayed during the punishing title track and “Godhead,” which boasts one of the strongest riffs the band has busted out to date.

Buoyed by a punchy production job, the band is able to rip through songs like the 90s’-era thrash of “Hatebox” (think Low-era Testament) and the standard, heads-down patterns of “Born For War” and “Code Black.” And this is where Onslaught can get themselves into trouble – there’s just too much predictability here, especially when a blind man can see when the polka beat and a searing guitar solo is going to be dropped in. It’s also why the album picks up some steam with “Antitheist,” a song that wisely veers off the standard thrash path.

Since thrash these days is such a broad spectrum and bland palette, bands like Onslaught can’t totally rely on their past to make their mark. Of course, their past pales in comparison to the heavyweights of thrash, so it’s probably a good idea the band tries to at least fiddle with the standard formula they have to work with. Sounds of Violence is a far from world-beating, yet it should keep Onslaught’s name at least hovering around the thrash convo for the time being.