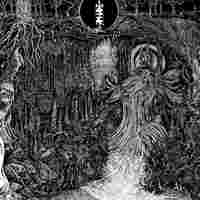 One Master is a New England/east coast-based black metal outfit, going way back to 2002, and now unveil their third full-length studio album with Reclusive Blasphemy. What jumps out right away with the band is the purity of their black metal. There is not really any cross-genre stuff happening here – something that is pretty common these days, especially with American bands playing in the black metal genre. No, the vitriol and bite is visceral and bleak. The occult themes feel tangible and the sound is the right mix of (a touch of) production rawness, fast and furious tempos, snarling vocal croaks, rasps, and screams. Stout musicianship and pretty captivating songs are the aspects of this band which make Reclusive Blasphemy the good album that it is.

Reclusive Blasphemy is front loaded with the excellent opener “At the Hour of Saturn”. Indeed it was this song which I listened to, and was impressed by, even before this album came across my desk for review. As such, I was happy to have a chance to take in the album from a critical standpoint based on the strength of said tune. What I learned with my time spent with the album, is that the opener is also the high point of the album – not saying that the rest doesn’t deliver, because it is all quality stuff, but perhaps the album would have went from “good” to “great” if the balance matched the start.

A point of reference that struck immediately in terms of other band comparisons would have to be Watain. But not so much current Watain as the Watain of the Casus Luciferi and Sworn to the Dark era, which is a good thing! One Master have a nice use of atmosphere in their sound – the dual guitars creating good, obscure harmonies together in the frantic tremolo-picking that dominates much of the album. Great bass tones as well are a key element of this atmosphere, snarling and fuzzed, yet toneful and punchy. These together with very solid drum work and fairly intelligible yet biting vocals show a band that very much has their shit together. If Reclusive Blasphemy is a jumping-off point for a listener, then it’s a really solid reason to explore their other two albums as well as to watch out for upcoming live gigs.