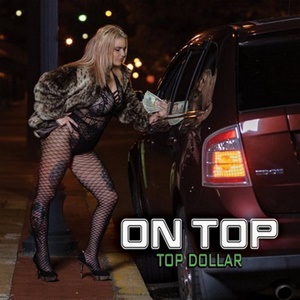 Certain themes remain consistent for this power trio On Top from Downington, PA. Active since 2008, outside of their debut demo Another Night of Sleaze in 2009, their subsequent EP/album output has had ‘Top’ as a part of the title… Top Heavy, Top to Bottom, and Topless. On their fourth EP Top Dollar keeps the trend alive, along with a lady of the evening standing outside of a car for the cover art. It all doesn’t mean anything if the shtick and titillation overrides the final musical product – fortunately for purveyors of stripped down heavy metal with some sleaze hard rock nuances, this gives off decent vibes.

Because the band stick to a guitar, bass, and drums minimalist set up, the foundation of the songwriting remains focused on standard blues-based oriented riffing of a three-four chord variety, a melodic yet forceful vocal delivery along with complementary flashy lead breaks and simple background harmonization to encase those choruses to the audiences far and wide. It wouldn’t be wrong to think about comparisons to Raven or The Rods when swinging to the grooves and mid-tempo anthem work of “Everything”, while opener “Lovin’ the Devil” gets off to a raucous start due to Ric Haas’ flashy guitar intro and subsequent speedy lead break, plus the incessant chorus title penetrating the airwaves. Sure, some of the groove/idea combinations reach back into that early Sunset Strip archives, as bassist/vocalist Jaron Gulino and drummer Danny Disgustor convey a healthy love of primitive Ratt on “Walk the Walk” – but because it’s not overproduced, you feel more of a fist to the gut approach that works wonders for the band. Jaron as a singer stays within his comfort lane – mid-range being his best feature, conveying his thoughts in a direct and personal manner, closely resembling an American-ized version of John Gallagher of Raven.

Subscribing to a ‘less is more’ approach at 4 songs in 15 minutes – Top Dollar takes me back to the early NWOBHM meets American hard rock atmosphere, before trends, imagery, and big record companies watered down the output to carbon copy catastrophe. And in this open playing field for the genre, On Top will gain traction.