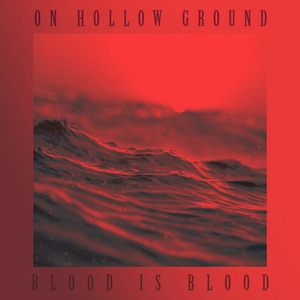 With three previous EPs in their history, Blood is Blood represents the first full-length from the UK’s On Hollow Ground. A band with a thoroughly modern approach to their brand of metalcore. Also included in the band’s sound is a bit of grime and hip hop, nu metal, and some traces of deathcore. With that in mind, approach with caution.

After a strong experience of seeing how dark hip hop was successfully integrated into brutal death metal (Carnifloor), this scribe decided to give the idea another shot with metalcore more in the focus here. But sadly, lightning didn’t strike twice in this regard. Owing more towards bands like Emmure, On Hollow Ground represents a relatively shallow experience that ends up rather unremarkable. Admittedly, the album opened with a hint of intrigue, with “Our Lives” sounding like some energetic metalcore that wasn’t afraid of embracing some heaviness while entertaining some atmosphere – even if it felt a bit on the generic side. But the one-two punch of follow-ups “Broken” and “People Never Learn” all but knock the wind out of the sails. Bouncy hip hop beats on the darker side couple with some shouted vocals, but instead of feeling brooding and intense, it comes off a bit cringe-y instead. Something more akin to nu metal experimentations into the genre, or the aforementioned Emmure. The latter track even dives headfirst into some deathcore breakdowns and growls along with it, but it feels a bit disjointed. Some playful melodies in “…And Getting By” provide an earmworm to help through the second half of the release, but the track itself gets bogged down in mid-tempo chugs elsewhere. The remainder of the album is mostly unremarkable, flowing along in the same lines as its predecessors and only “Even Though” having a strong enough chorus to warrant attention, with a more remorseful atmospheric tone.

The rap/metal combination is one that has had its hits and misses over the years. Unfortunately, for every solid iteration that comes about, we end up with dozens more that feel more cringe worthy than enjoyable. File On Hollow Ground in that latter category for the time being.