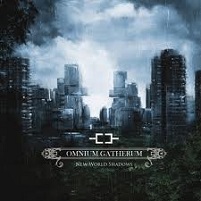 If ever a time to make a splash, you might as well go full-force when you switch label deals. Such is the case with Finnish melodic death act Omnium Gatherum, who on their fifth album New World Shadows take their already infectious and dynamic brand of music on a whole new plane compared to their contemporaries. I personally felt The Red Shift was an outstanding blend of intensity and quick hitting songwriting that made addictive riffing and atmosphere appeal to a wider cross section of metalheads, but I doubt even those critics in the know would have ever envisioned this.

So to completely mess with our mindspace, guitarist Markus Vanhala and his faithful crew decide they may as well extend their sound to boundaries previously thought unnecessary. Open the album with a 9:17 “Everfields” and end with a 9:29 “Deep Cold?” Throw down harmonies that just ring in your ears for days mirroring the classic Priest or Maiden days like the ones in “Ego?” Listen to vocalist Jukka Pelkonen sink into the depth of his diaphragm to roar the words from “Nova Flame,”one of those mid-tempo meets-doom-stomp classics with Vanhala again weaving his guitar technical mastery around the arrangement for double impact? All these questions and more will convince you upon initial exposure, and make you return for continuous playbacks.

There isn’t a weak song out of the nine. Drummer Jarmo Pikka flexes more of his slower building steady pacing on the tracks that have multiple harmonic circle parts, including bassist Toni Maki into the mix on personal favorite “An Infinite Mind.” The mixing and mastering by Dan Swano (who also guests with clean vocals) gives New World Shadows that spacey vibe to compel the listener again and again to the nuance of acoustics and electric instrumentation with subtly and strength of character.

Simplyput, Omnium Gatherum rules. Early contender for album of the year – must be something in the Scandinavian waters, as they shine over all in their subgenre.