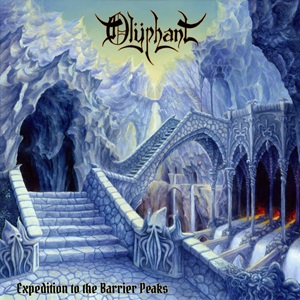 Salem, MA may be best known for the witch trials, but there seems to be some potent metal brewing through the likes of this quintet Olÿphant on this full-length Expedition to the Barrier Peaks. Although this scribe’s first exposure to the band, they’ve been together since 2009 and have two earlier EP releases under their belts. Admitting affinities from Tolkien, Lovecraft, Advanced Dungeons & Dragons, and craft beer beyond the music, you can bet through these 8 tracks you’ll be in for a classic metal adventure that contains everything from doom and stoner influences to a bit of progressive and thrash – making for an exhilarant, multi-dimensional outing.

The softer strains which open “The Grey Havens (To the Sea)” quickly transform into a majestic epic number that recalls 70’s Judas Priest with possibly a touch of Black Sabbath during the Dio days and Metallica, as keyboardist/vocalist Andy Small takes control with a fierce and magical duality to his melodic range (a more controlled Scott Jeffreys of Confessor comes up often) that resonates metal through and through. Interludes and effects such as vocal delay in spots create another world atmosphere. Many listeners will appreciate the open snare sound from Steve Dowsett on the more progressively adventurous “The Expedition”, a feast in terms of the intricate guitar interplay for Scott Randall that has a lot of Mercyful Fate/ Rush similarities (the time change around 3:51 very “2112”-esque). A lot of the solo work has that flashy run propensity to elevate the heart rates – and the ‘woo-hoo’ background vocals for “Before the Fall” should give Olÿphant audiences an apt participation moment when aired live.

Properly topping things off in terms of a professional, winter/icy cover from William Collins worthy of poster/tapestry conversation and the future looks very promising on all fronts for this five-piece. Expedition to the Barrier Peaks has that 70’s/80’s classic metal style while adding in the right stoner/thrash and narrative nuances to keep interest from beginning to end, very rare indeed in these quick moving aural times. 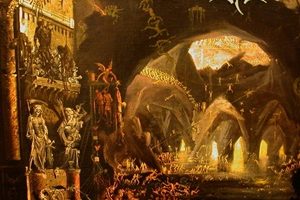