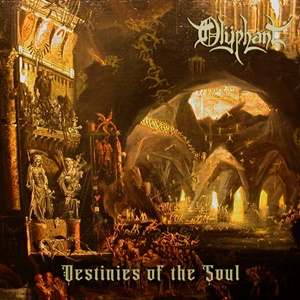 Combining an array of progressive, atmospheric, traditional, doom, and thrash influences, Massachusetts band Olÿphant ensures the listener will never be bored song to song when taking in any of their recordings. Destinies of the Soul is the follow-up to 2016’s Expedition to the Barrier Peaks, a record gaining favor with this scribe for the fantasy-oriented lyrics combining with a sound that is equally alluring for its epic, mystical soundscape where 70’s/80’s influences abound. These musicians wish to take you on a trip to their passions, inviting you into a coven where twin guitar harmonies, atmospheric/spacey keyboards, adventurous grooves with progressive fills and hypnotic vocal melodies unite as one in the celebration of all that is vital in heavy metal.

Echoing guitar strains against cathedral-like keyboard cascades make “Deities & Demagogues” an immediate highlight, the time signature progressive tempo change during the instrumental section breathtaking as Scott Randall lays down quite the mesmerizing guitar break while vocalist/keyboardist Andy Small mutates his voice between his normal doom-oriented melodies and occasional dark, fierce roars. Exotic musical textures with circular guitars give “Beyond the Door” an interesting twist out of the gate, the arrangement again taking on more of a traditional power sheen with Mercyful Fate/ Iron Maiden-like movements as the drumming gets very frantic and progressive with its tricky hi-hat/snare to transition maneuvers. Occasionally the band exercise some of their penchant for heads down thrash with a song like “Die, Monster, Die” – the ripping main riff and double kick energy addictive for swirling hair windmills, the drumming/guitar tradeoffs dynamic while the keyboards add that extra melodic catchpoint. Beyond the six songs in the main there are three brief interludes that set up cinematic/soundtrack-like breaks in an aural sense – “The Great Old Ones” starts the record with some distant narrative voices and Andy’s Black Sabbath/Savatage-like evil keyboard tones, while “Grimoire of the East Woods Witch” contains some lower guitar feedback work and a perfect epic doom angle in its 1:38 time frame. Macabre tales in an old school musical framework, the additional mixing support from West Coast engineer Brian Scheluble (Anthrax, Kiss) adds to the haunting, throwback vibe the band delivers.

Olÿphant as an older act remind me of the days of independent metal that hit from Europe and the US during 1983-1986 – a willingness to explore traditional metal from all sides, be it doom, epic, heavy, progressive or thrashy. Destinies of the Soul has all the tools to entertain, gain excitement, and also stir to depths of your darkest emotions – a fine combination worth engaging in if you love Dio-era Sabbath, Mercyful Fate, early Savatage, and a bit of Rush/Iron Maiden in spots. 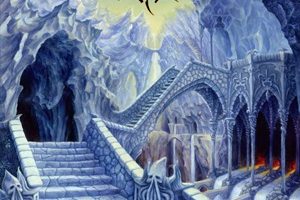