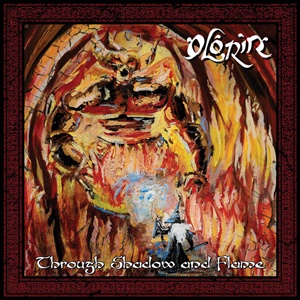 Those familiar with Lord of the Rings know Olorin as the old name of Gandalf the wizard. Well, it’s also the namesake for this Illinois doom metal band. Together since 2009, they’ve released a self-titled demo, live album and two EP’s prior to this full-length Through Shadow and Flame. Signing to German label Rafchild, the five-piece contains two members of Smoulder in guitarist Collin Wolf and drummer Kevin Hester – so it’s very appropriate that these seasoned musicians know a thing or two about depressive, slow music and the components necessary to deliver strong, memorable performances.

Crushing riffs at snail’s pace tempos allow the vocals to dance in an eerie, often nursery rhyme-oriented delivery. The natural lower tones plus solid snare/kick poundings for “Descension” and “The Endless Stair” sends shivers through the air, accenting an appreciation for the work of Wheel, Hour of 13, and Candlemass among others. The use of keyboards and church bells during the 1:47 “Mornië” set the stage for the almost ten-minute epic closer “The White Rider” – Wolf and fellow guitarist Michael Schmidt filling their duties seamlessly, building atmosphere in big, lumbering riffs, the ominous keyboards volleying off their work, the emotive lead break the stuff of legends. Where the rubber meets the road for full engagement and enjoyment will hang upon the patience many will lose regarding Clay Sibley’s vocal delivery. He has this wild warble that can definitely struggle to place key notes in the right places – not exactly what most pure doom followers desire in a genre with Messiah Marcolin, Rob Lowe, and Ronnie James Dio as the masters.

Olorin probably will achieve cult appeal based on music and packaging alone – you just wish that the vocals could match some of the grandeur and substance present for the songwriting and performances contained within. Guess we’ll have to wait and see what the future holds here.