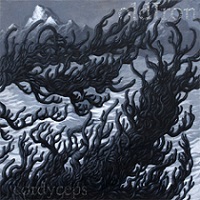 Self-described as playing “heavy, low-tuned, melodic music,” where Seattle’s Old Iron lack in verbal bouts of back-patting, they make up for with an enticing, not-quite-fully-realized display of Isis-on-Samothrace dreariness. Indeed such a combo is worth a croak; Isis, perhaps the predominant post-metal band of our time, Samothrace, a underrated slow-mo sludge crew with a fancy for melody, coming together under one umbrella in the form of Cordyceps. Considering the band’s relative newbiness (they formed in 2011), this still, is a worthy start.

Per the fact the band is unsigned and probably operating without a quality budget, the album is a basement recording, which should be of note – it doesn’t sound like one. The guitar tone – rigid, yet flush with those towering melodic chord movements – is undeniably heavy. And, when played at a slower tempo (which goes for a hefty portion of the album), there’s some slick, engaging moments to pull from, like the gradual crash and bang of the title track, or drum-and-bass tactics on “The Pineal Gate,” which is perhaps the album’s strongest cut, even if it’s the least melodically-inclined.

The band’s influences might be readily available on their respective sleeves, so there may not be a whole lot of new ideas to catch from Cordyceps, yet the professional, finely-tuned manner in which the album operates doesn’t leave that much room for complaint. Simply, it’s well-executed music from a band probably still feeling its way around, which is totally natural. However, once the band pegs down those melodies and runs for the hills with them, they’ll be post-metal, post-whatever gold. And still rather heavy.