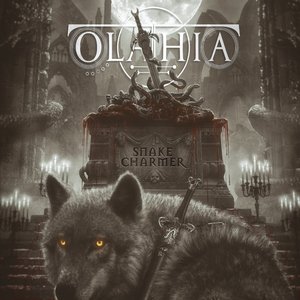 First encountering Olathia back in 2015 with their first release Hunters, it’s been four years since any new material has surfaced from the thrashy Cleveland, Ohio act. The bright blue of Hunters was quite eyecatching as an introduction, so the first glimpse of Snake Charmer’s much darker artwork can mean only one thing, right? Snake Charmer is indeed a heavier and more varied beast than its predecessor, and the wait between albums has clearly only solidified Olathia as a heavy metal force to be reckoned with.

From the opening moments of the title track, you are immediately hit with some heavy riffs. Those familiar with the band already understand the band’s ‘heavier than most’ approach that skirts some traditional metal lines, but Snake Charmer takes it to a whole new level. The thrash elements present in Hunters have been given an augmented role and this darker sound suits the band well. More primal moments and visceral riffing take songs like “Torn Apart” and “American Dream” and inject blistering rhythms and even a few blastbeats to breath some new life into the modern metal backbone. A plethora of screams and shouts also accompany vocalist Chris E.’s lush yet powerful singing. This mix is quite potent with tracks like “Martyr,” which trades-off anthemic traditional metal melodies that make one want to raise their fist in the air, with crushing riffs and deadly screams giving it extra liftoff. Other songs like “Isolation” feature some more moody openings before they explode into galloping metal glory, and the emotionally powerful closer “Punch Me I Bleed” manages to reel in some catchy, slower tempo moments without having to whip out a ballad to accomplish it.

What’s best about Snake Charmer is how it weaves in traditional, modern, and thrash elements (not to mention some even heavier ones) into something that appeal to fans of all these genres without watering things down. Whether you are looking for some aggressive modern thrash riffing, classic heavy metal guitar heroics, or soaring choruses, Olathia delivers it all with plenty of flair behind them. But most important of all, Snake Charmer is an addictive and fun listen that oozes heavy metal glory.