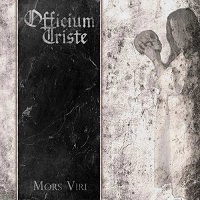 Once past the impenetrable wave of initial Goth metal pioneers Katatonia, My Dying Bride, and Paradise Lost, there’s been little in terms of bands able to pick up the pieces. With the exception of the Novembers Doom and possibly Crematory, second and third-wave acts of this variety come short, for dingy, sobbing Goth metal can’t put down roots enough to have an impact. While most of it is still a step above funeral doom, the prevailing notion with bands like Officium Triste is that they’re nothing more than third-rate imitators. On Mors Viri (their fifth album), the band does little to dispel that sentiment. It’s piecemeal death/Goth at its most obvious.

The predictable, slow, churning, slightly tedious opener “Your Fall From Grace” was a prime indicator as to how the album was going to play out. Utilizing the overdone painfully slow melodic guitar line mixed with grunted vocals template, Officium Triste may appeal to the quasi EMO contingent that exists in Goth metal (fact: a lot of this stuff comes off as equally as pitiful). The piano clanks of “Your Heaven, My Underworld” serves as a segue into the woe-is-me lyrical gaze, while the plodding “The Wounded and the Dying,” and slow-footed closer “Like Atlas” fail to exact any sort of excitement…there’s just too much of a proliferation of familiar ideas that when played at such a slow speed, come across as half-baked.

Mors Viri treads a very dangerous line to funeral doom because of its flaccid nature. Since it’s not the bore-a-thon that funeral doom is, it becomes another one of those Goth albums prone to killing the listener softly and gently, all the while being as harmless as a moth.