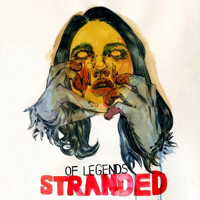 Can’t hurt to have Ben Weinman of Dillinger Escape Plan in one’s corner, which is the case for Of Legends, who get an instant dose of credibility from the DEP guitarist (who co-manages the band). On their debut Stranded, the band kicks up the angry, oh-so subversive dust-storm that the likes of Bring Me the Horizon are making a live out of, save for the fact Of Legends is much better. And actually listenable.

Led by singer Luis Dubuc, Of Legends use the down-tuned, dropped-style of riffing that typically rests heavily on beatdowns or groove-intensive tempos.Stranded is engulfed in it, and forces the listener to keep their head on a swivel during “Nothing Matters,” where Dubuc spits and cackles with raging intensity. It’s not your typical deathcore modus operandi, given that Of Legends keeps the tempo usually around one pace, thus allowing for some extra breathing room during “Death Eyes” and the more manic “Cannibal King.”

On the flip-side, Dubuc’s singular vocal focus tends to wear thin pretty quickly, considering he’s plastered all over the album’s 10 tracks. And because there’s such a propensity to stick just with one riffing template (“The Last Leader” does give the ‘ole Meshuggah spin a go), it becomes increasingly difficult to disseminate between one muddled chug to the next.

Nevertheless, Stranded has quite the girth and when stacked up against bands of this ilk, it fares quite well. Always wonder about the shelf life of bands like Of Legends – they’re only limited to a few sonic options, and when those start to run dry (or everyone copies them), it’s usually when it’s time to bow out. Not a bad start, though.