Of Fire – Death Do Us All (Self-Released) 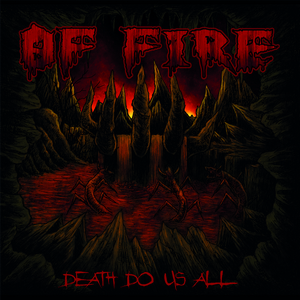 Swedish death metal bands have certainly acquired a share or two in the market, but how many of them can say that none other than Tomas Skogsberg discovered them? Of Fire was initially given guidance by the man himself, as he took them under his wing to record their debut, Carnage Fever. This brings us now to the band’s return to Sunlight Studio for a second round of genuine Swedish death metal with Death Do Us All.

Shooting straight and sticking to the point is Of Fire’s strength, and their self-professed “heavy as shit” death metal is all the better for it. There’s no attempt to circumnavigate the Swedish sound into something it’s not (particularly when they are at the Sunlight Studio wheel after all), and you are left with a sound that those into it will find no fault with. While it doesn’t add much in terms of originality, there’s clear enthusiasm aboard, and thick and chunky death metal riffs are the gift that keeps on giving. From the doomy and creeping (“Pestilence”) to the rollicking and rolling (“Straight from the Grave”), Of Fire has gotten their education from the best and keeps things catchy, with just the right amount of heaviness. Oh so subtle (and sometimes not so subtle) melodies give “Scavengers” some immediacy and groove, while the tempo shifts ensure that no one is going to mistake the band for playing the same song on repeat. Obviously, given the pedigree but to state it anyways, the production is just what this type of album needs – thick on the guitars but not an utter mess.

Love it or leave it, Of Fire give an enjoyable batch of Swedish death metal done right. There’s crunch, there’s groove, and there’s brutality and melody. All the ingredients necessary to power this one long enough until they decide to fire things up for round three.