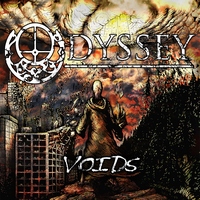 Instrumental metal can be a tough sell. Oftentimes the music becomes too self-indulgent or endlessly meandering, other times the music just lacks a certain lasting appeal without having vocals behind it. One can argue the true merit of vocals in extreme metal, but they do help complete the package. Rare is the band that can keep some restraint and still keep things interesting, particularly when it’s on the progressive side of things.

Washington’s Odyssey are no newcomers to the progressive scene. Forming in 2007, Voids is their third full-length effort and it’s clear they are at the top of their game. Their strongest asset is that they have a thrashy and aggressive underbelly that mingles nicely with the standout musicianship and intriguing melodies. It gives them an edge and allows for plenty of dynamics. Take the song, “Negate the Infinite,” which opens with some compelling thrash riffing (all of which is effectively headbang-able) that is as sharp as it is melodic. Then the song takes off into a plethora of stunning leadwork and rumbling bass lines before things come to a close. The thrashy songs are balanced by a few more atmospheric pieces, such as “Echoes” and “Left Unspoken” to leave some room for reflection. Standout “Delineation” takes the more melodic elements and merges them with more chunky, heavy riffs for maximum appeal.

Things never become self-indulgent on Voids, yet the band really makes full use of the space they have. Whether it’s a standout riff, playful bass line (of which the title track and “The Plot Thickens” employ plenty of), or a ripping solo, there’s a sense of songwriting craftsmanship here instead of merely showing the listener all they are capable of in a two-minute span. There’s always something going on that you can listen for, and there’s never a want or need for vocals to fill some space. Voids is worth looking into if you seek some well-played progressive music.