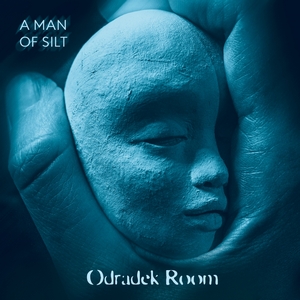 When it comes to doom metal that’s sitting along the Hypnotic Dirge lines, it’s usually safe to assume that it’s not going to walk down the beaten path. Odradek Room settles in nicely with this idea, usually doom metal as simply a propellant to veer into more progressive, atmospheric, and haunting waters. Clearly, there’s much to take in with A Man of Silt, and the absorption process may require a few listens.

While doom and gloom abound for A Man of Silt, Odradek Room still play their cards into some different emotions as well. Sometimes they can bring the heaviness up a few notches, such as “Mirror Labyrinth,” and usher in some aggression, while at other moments a more lush and atmospheric tone is achieved (“Divide”). They also bring in additional instruments, such as the saxophone on the gorgeous “Rain Trip” or horns on “Selfness,” without becoming self-indulgent or just for the sake of having them there. The addition of synths, clean and harsh vocals, and dreary movie-esque atmosphere gives them an even broader field to play in. However, all of the various motions that each lengthy track goes through aren’t all equally compelling. Some of the songs tend to drag on for a bit longer than one might like them to, which causes some otherwise striking material to lose its edge (see “Texture of Reality”). At times, it almost feels like there’s too much in the mix, and a condensed version might lead things back towards something more graceful (“Rain Trip” being the pinnacle in this regard).

Odradek Room do manage to impress with A Man of Silt, but they overextend themselves on a few occasions. The potential for something ground-breaking does lie within their grasp (and you can see the glimmer of it on several tracks), and a more concise approach might be just the ticket.