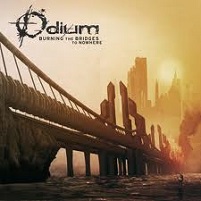 I’ve been listening to Odium’s sophomore effort and despite being Canadian, they certainly continue to sound like a melodic death metal band from Sweden. Of course, there is nothing wrong with this fact, nor is it bad to say they remind me of Scar Symmetry and In Flames. For that matter of fact, insert any number of death metal acts coming from Sweden and I think you get the point loud and clear.

Burning the Bridges to Nowhere is chock-full of riveting aggression and it proves this band can be heavily influenced by the Swedish sound, but yet still deliver an original enough approach. I thought their debut was an engaging piece of melodic death metal, but let me go on record and say Burning the Bridges far surpasses that initial release in many ways. A pummeling blast of double bass drumming and grinding guitars churn out waves of melodic passages, and this is just set within the first few minutes of track one. The second track “Within the Distraction” floored me completely, once you hear the effects of the frantic riffing midway through the song.

The blueprint to this melodic style is obviously two-fold. First you hear the soaring vocals of Tom Emmans, as the dude switches effortlessly from growls to crooning in mere seconds. His voice is commanding (when relying on the cookie monster growls) and soothing when singing through the clean parts. He’s definitely the captain that guides this ship, but I would be remiss if I didn’t mention the musical efforts brought forth by his partners in crime. Guitarists Bo Louther and Andrew Fullerton charge on through with an array of tremolo riffs combined with groovy passages and leads that swell to ridiculous ferocity. Their steady stream of raucousness is bolstered by a strong rhythm section of Dale Burrows (on bass) and Joe Mullen (on drums).

Clearly this fivesome prove to be titans of the genre, and on this release the subtle nuances within most of songs begs the listener to pay close attention. In particular, songs like “Blue Channel,” “Viral By Nature” and “Identity of the Doomed” are all emotionally charged numbers and when you get to the closing track (The Descent) on this release, it becomes a truly moving piece. Again, the subtle nuances take shape in the form of atmospheric strings and combined with a soulful vocal performance from Tom Emmans helps to cap off this splendid release.

Without a doubt this is one of the better modern melo-death metal albums out this year and the uniqueness within their sound should help to attract new listeners. Album number two is exceptional and now I wait in earnest for their next release. I am sure it’s going to be as stunning as this one is. 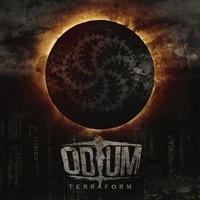