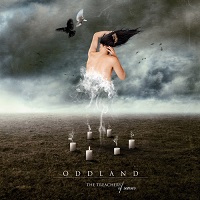 Anyone that has been in a band and has entered a Battle of the Bands knows they’re practically rigged. The judges are in cahoots with at least one of the bands, or said band has paid a truckload of money to get a prime playing slot when the most people are in attendance. Therefore, there’s this over-emphasis placed on what basically is a popularity contest. We bring this up because Oddland were the winners of the Soumi Metal Star, which is held annually at the Finnish Metal Expo. As lady luck would have it, this enabled them to land a contact with Century Media, and probably left all the runner-ups feeling rather bitter. They always end that way, don’t they?

From the same progressive metal family as Opeth, Oddland’s style stretches beyond that of Akerfeldt and co.’s and into more adventurous avenues on theirThe Treachery of Senses debut. A lot of this has to do with the band’s ability to meld exotic rhythms and jazzy melodies, like on “Past the Gates.” Beyond that excursion, Oddland proves rather capable of bringing the force on opener “Above and Beyond” and neck-snapping rumble on “In the Eyes of the Mourning.” Album highlight “Still the Spirit Stays” has another head-bopping cadence, further embellished by crisp melodies and a grueling mid-section.

Singer/guitarist Sakari Ojanen is going to have quite the difficult time escaping the Akerfeldt comparison clutches if he continues singing the way he does on the aforementioned “Still the Spirit Slays” and “Flooding Light.” Yet, when he bears down and stretches out, he sounds more like Dan Swano (Edge of Sanity), which in itself, is probably better since Swano is a better clean

Probably more out of the box than we initially suggested, The Treachery of Senses should turn some heads only because there’s a huge Opeth wave hitting at the present time, so naturally, everyone feels the need to jump aboard. Such a connotation for now does Oddland some degree of justice. Down the road, they’d be better off fending for themselves without having to worry about the dork metal gang coming after them for nicking Watershed.