Wednesday, 1st May 2013 By Matthew Bowling 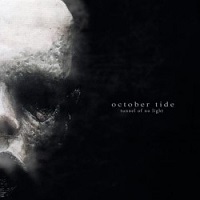 For lovers of mid-paced melodic death-doom, modern nights are particularly sparse in their offerings. Big-name releases are few and far in between but for the faithful a light emerged in the return of October Tide to the forefront of former Katatonia guitarist Frederik Norrman. A Thin Shell was a quality release and Tunnel of No Light continues in that tradition while raising the bar in a variety of ways (while holding it steady in others).

Steamrolling melancholia is the name of the game on Tunnel of No Light. Everything is thick and punctuated by equal parts misery and desolation, glossed over with streaming melodies and surprisingly laden with a variety of odd-and-end surprises. Sound stalwarts like “Caught In Silence” and “In Hopeless Pursuit” feature a mid-pace pulse dressed in walls of guitar, gut-murder vocals, and gloriously succinct indulgences of melody, both in the riffing and more importantly, the ongoing leads. Legitimately classic vibes abound.

Turns toward the experimental are featured on other tracks, especially on early stand-out “Our Constellation” with its positively chilling initial break and supplementary bass-work, this is how you let the bottom of a song fall out in an impactful fashion. “Watching The Drowners” is a slow-crawling and mournful piece, a giddy-vibes inducer with more than a few nods to the older work of Finnish ghosts Rapture. Lovingly heady stuff.

I was never the biggest fan of A Thin Shell, for while it was fun enough in small doses, most of the songs were too similar in length and sound – often bleeding together. That isn’t the case this time around as the band has sharpened and refined its approach and even when stretched out there is a distinct lack of filler. Wash your hands of happiness and dive into Tunnel of No Light, it’s unlikely you’ll enjoy being miserable this much again.