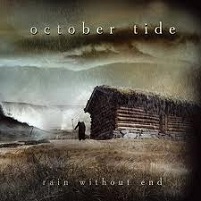 The final missing piece in the vaunted Katatonia-related side project catalog, the reissue of October Tide’s Rain Without End is an absolute must-have. Recorded in 1995 when singer

/drummer Jonas Renske and guitarist Fred Normann became estranged from guitarist Anders Nystrom, Rain Without End is for all intents and purposes, the bridge

between Dance of December Souls and Brave Murder Day.

It’s widely noted Renske has long disliked the production values behind this album, which could explain why it was scarce for so long. A Dan Swano remaster job does the trick, giving the album full scope and sonic depth, but like most albums from this era, a crystalline production job would probably take away from the charm and atmosphere. Therefore, it’s gritty production values (yeah, the snare is a bit too lively) make the album what it is.

Characterized largely by lurching, post-Paradise Lost melodies Katatonia became so enamored with around this time, Rain Without End is more developed and less plodding than Dance of December Souls, which may sound blasphemous to some, but it’s true. Opener “12 Days of Rain” is a fully realized number with equally morose and melodic guitar

lines, while “Ephermeral” and “Blue Gallery” embody the slow, painstaking atmosphere of British doom ala early My Dying Bride and Anathema.

Hooks abound on the up-tempo “All Painted Cold,” which might be the bestsong

of the bunch. That or “Sightless.” Renske’s deep and throat-scraping growls are full of black emotion and when paired with Normann’s simple, yet deceptively cunning guitar lines, the results are godly.

Per the suggestion this album was the obvious precursor to Brave Murder Day, “Losing Tomorrow” is a dead-giveaway to the song “Day” and sees Renske use, for the first time, his Robert Smith-on-his-deathbed clean vocals. It’s simply breathtaking.

Rain Without End would have scored higher had it come with more detailed liner notes. Actually, there are no liner notes, so screw that. Some historical recollections from the duo would have been perfect, especially under the circumstances in which this album was recorded, but ‘tis not to be. But considering Renske and Normann never did interviews or promotion for October Tide, it makes sense.

Of the two albums in October Tide’s discography (1999’s strong Grey Dawnbeing the other), Rain Without End is the keeper. Borne out of turmoil and strife, Rain Without End is a landmark of European dark/doom metal and is rightfully deserving of its place in the untouchable Katatonia pantheon.