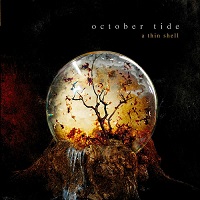 Leaving Katatonia. It’s not like leaving Las Vegas or leaving Metallica to play for Voivod (ref. Jason Newsted), but in these circles, it’s quite the leap. Yet with those leaps, comes opportunity, something former Katatonia guitarist Fred Normann wisely took hold of when he reformed the massively underrated October Tide project he started with Katatonia singer Jonas Renkse in the 90s. Renkse is not involved here (we’re trying to figure out why), leaving Normann to assemble a new band and an album in the form of A Thin Shell that is magnificent. Like, world-beating magnificent.

Previous October Tide albums (1995’s Rain Without End and 1999’s Grey Dawn) saw the band revel in dark, death/Goth soundscapes, something that has been pushed along further on A Thin Shell. By combining the atmospheric charm heard before, with the atmospheric gall of mid-tempo Hypocrisy, and the atmospheric desperation of Daylight Dies, OT has created what is arguably the year’s darkest and intriguing album. It’s very atmospheric, can’t you tell?

Little reference to Katatonia is made here, which is wise, as any trickle or Brave Murder Day-like guitar line would have compromised the whole thing. Instead, Normann masterfully weaves in crunchy riffs, with barren chord that are equally haunting (“A Nighttime Project”) as they are worthy of bouts of head-banging (“The Divided Line”).

Album standout “Blackness Devours” easily has the most unsettling, yet charming riff sequence of the year, while the somber “Fragile” starts on a melodically-inspired note, only to fall off into dreamy, morose territory that hitshard at the 1:36 mark. Album closer “Scorned” follows suit, evoking the vibe heard on Grey Dawn, with new singer Tobias Netzell unfurling his burly, husky bark to massive effect.

As evidenced by the above rating, it’s more than likely A Thin Shell will get this scribe’s nod for the Album of the Year. Not like we’d ever underestimate anything coming out of the Katatonia camp past or present, but A Thin Shell is an emotional pummeler; the type of album that leaves you out in the cold, but makes you come back for more. Brilliant.