October File – Our Souls To You (Candlelight Records) 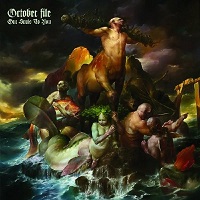 Someone’s been following CNN…or the BBC. Or any news outlet, reputable or not. On October File’s third full length, Our Souls To You, the steaming social and political commentary serves to highlight the band’s grinding punk/metal hybrid. There’s a lot of meat behind this thing, brains too, and it’s a refreshing take on times when bands actually had something to say.

When singer Ben Hollyer talks about trust funds drying up, not being able to sleep at night (because you don’t know where your money is), and other state-of-the-world affairs, you know he means business. Matters only get heightened on the frenzied “A Public Display of Anger,” which serves a sort of a soundtrack to a riot act, only Hollyer is talking about how “you won’t survive to see your children.” Dire straits, mate. Best of all, Hollyer has what amounts to a vicious, but discernible snarl. It’s not metal, nor is it punk, which pretty much sums up most of the album in general.

With Godflesh mastermind Justin Broderick behind the production board, Our Souls To You brims with confidence. Sure, there’s a steady, direct template to the band’s sound, yet there’s a carefully-constructed amount of variety here, plus some catchy, immediate choruses in “Isolation,” as well as a short and sharp punk bounce to “September.”

People don’t want to be preached at these days, nor do they feel like being informed, but in the case of October File, their timely diatribes on society and the world are both welcomed and appreciated. You’re not going to find a more intellectual album in 2010 than Our Souls To You.