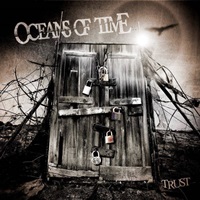 Probably best known for its black metal proclivity, people forget that Norway has consistently produced a steady stream of more melodic metal fare for decades: TNT, Artch, Conception, Pagan’s Mind, and Circus Maximus have all made headway outside the country. Fredrikstad’s Oceans of Time aim to add their name to that host of acts – a power/progressive metal outfit that began in 2005 and in the past decade have issued a demo, EP, a full-length debut album in Faces for Melodic Revolution Records, plus a single prior to circling back to independent avenues for this second album Trust.

These musicians don’t necessarily go for spirited intricacy in terms of juggling time signatures at every opportunity possible – a lot of times the progressive aspects come up through waves of sonic execution in the keyboard/guitar departments or the use of dynamic cultural flavoring. The keyboard pitch bending and equally energetic lead guitar accents for “Black Death” give way to a more galactic, outer space experience in terms of the computer enhanced vocal effects or musical spacious layering for the follow up “Nemesis”. As a singer Ken Lyngfoss does a serviceable job – he’s no Tate or Alder in their prime, the register more of a down to earth delivery with bluesy/gritty inflections, even theatrical at times when called for in a shape-shifting arrangement like “Save You” where you get everything from keyboards that sound out chimes, instrumental passages that throw down syncopation arpeggios galore and gang background vocal supplementation.

The four part “Grapes of Baccus” saga closes out the record, featuring guest vocal work from Pagan’s Mind’s Nils K. Rue and ex-Masterplan vocalist Jorn Lande – a 15 minute epic that contains shimmering drum work from Nicolay Ryen Christiansen, a versatile arrangement that includes some death /djent-oriented parts that actually work, as well as new age/jazzy instrumental parts against killer lead runs from guitarist Lazz Jensen that would make John Petrucci envious. Decent production values bolster the overall product – this scribe would have preferred a more natural kick sound though as the triggered double bass can overwhelm and drown out other instruments during many faster passages.

Imagine classic Labyrinth going hand in hand with the more melodic sides of Pagan’s Mind and Symphony X and you’ll get where Oceans of Time is going for on Trust. Not bad at all.