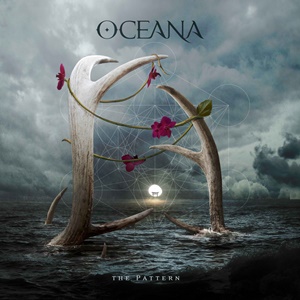 Oceana features some long-running members of Italian bands such as Novembre and Stormlord – originally coming together during the mid-1990’s and releasing a demo plus EP before hitting the pause button for nearly a quarter century. The Pattern represents a wide scope of material, encompassing eleven tracks and over 62 minutes of music that mix everything from progressive and gothic metal to European style death/doom. You can expect layers of guitars, keyboard ambiance, moving rhythm section work and vocals from a multitude of growl/clean textures that envelop the aural surroundings, promoting a wide array of deep emotions for the listener to absorb, process, and engage with.

The skill set of multi-instrumentalist Massimiliano Pagliuso gives plenty of versatility – guitars, bass, keyboards and clean/growls vocally open up the playbook for lead guitarist Gianpaolo Caprino to place his tender touch with emotive clarity in a progressive manner. David Gilmour and John Petrucci probably two axe mentors to Gianpaolo as you take in his technique and careful note choices for early highlight “Violet”. Intertwining ideas that are fairly straightforward and commercial a la old Paradise Lost and Edge of Sanity, most will be fixated on the hypnotic, alluring gothic meets crunchy 90’s Metallica charge for “Tragicomic Reality” or the solid mid-tempo rhythms and calmer clean melodies during “Spoiled”, the clean musical transitions and occasional up-tempo progressive gallop setting the stage for harmonic bliss on the multi-tracked vocal front. Towards the back half of the record the 14-minute plus “Atlantidea Suite Part 1” showcases Oceana through an epic, progressive metal arrangement – the early sequences almost 80’s Duran Duran-like before the Dream Theater/ Rush time signature intricacies unfold, including some powerhouse drumming from Alessandro Marconcini and some interesting gruff vocal measures during specific, moving/dynamic passages. Also intriguing is the choice of covering “The Unforgiven” by Metallica – the echoing clean guitar tone more spacious, but for some reason the semi-growl main verses aren’t as convincing as the normal Hetfield-led delivery.

Oceana synthesize many different sub-genres within the gothic, doom, and death platforms through a progressive metal lens, as a result allowing The Pattern to be a thoroughly exhilarating record that most will gain something from immediately and through successive passes become enduring.