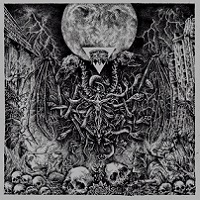 Blackened crust/death punk group, Occultist, began as an experimental jam project in the musically prolific city of Richmond, Virginia (hometown of other extreme musicians such as Lamb of God, Municipal Waste, Druglord, and GWAR), initiated in 2009 by Jim Reed and Leland Hoth, later that year joined by additional members. As early as 2010, ex-vocalist Will left the band and Kerry Zylstra seized the mic with no previous band experience, but with her fierce screeches and screams, none needed. Only a year after their demo release, Hell by Our Hands, Occultist announces their first full-length album, Death Sigils.

With turbulent fury, vociferous forces, and hardcore thrash, Death Sigils is the work of two slashing guitarists, Kent Jung and Jim Reed; rumbling bassist and growler, Nathaniel Acker; battering drummer, Leland Hoth, who has since left the band to focus on Vorator and been replaced by Brandon Whittaker; and one of the few hellfire female singers in metal, Kerry Zylstra. Signed with Primitive Ways, Death Sigils was recorded at Slave Pit Studios by Dave Gibson, mixed by Gibson and Reed, and mastered at Mammoth Sound by Dan Randall. The album’s artwork, done by Stiv Baritch, is spectacularly intricate in illustrating esoteric, hexing, preternatural practices. Some of the band’s influences and lyrical themes include the occult (obviously), death, devils, theology, catastrophe, collapse of humanity, rituals, and historical discrepancy.

Occultist is an incessant summoning of aggressive, ruthless, and raw monstrosity. They transiently arose as a band to hastily relinquish a collaboration of black and death, crust and core, punk and metal. K.Z. is sure evidence that chicks can be just as, or in some circumstances more, savagely wild as stud vocalists. Her demoness vocals alongside the torrential instrumentation might leave you gasping for a moment of mellow, but all the more avid for their brutal pulverizations.