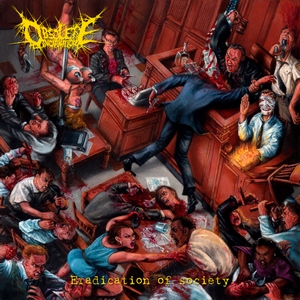 Eradication of Society finds itself running square in the center of everything and not moving too far into one direction or another. There’s some solid grooves (and death metal breakdowns), the band can regularly accelerate into blast beats, they toss in a few pig squeals in addition to the growls (see “The Faceless”), and they even incorporate a slight technical angle here and there. But for the most part this is straight-up brutal death metal that retains a certain focus. Ultimately that is where the problems lies as well – in attempting to cling to the center of everything, Eradication of Society ultimately sounds ordinary. There’s nothing to differentiate Obsolete Incarnation’s work from the rest of the brutal death metal pack. There’s some moments that they provide, or a slick riff here or there (see a real cruncher that opens up “Limbus”), but nothing seems to stick with the listener after the EP ends.

With its length, an EP can sometimes forgo the usual tropes due to a short runtime, but Eradication of Society does not end up receiving this boost. There’s nothing that Obsolete Incarnation does that is particularly burdensome, but the EP ends up sounding too familiar to leave a lasting impression. Because of its execution, there’s a certain portion of the death metal crowd that will no fault with what’s presented, but for the rest of us you are safe to check out a song and see if it sticks.