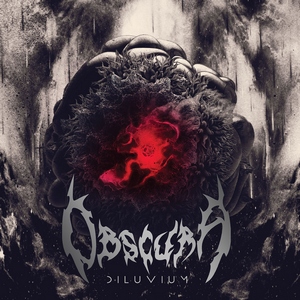 It seems like it has been a long-time coming, but we’ve finally reached the fourth album in Obscura’s conceptual unit, a time period that begin with 2009’s Cosmogenesis. Over the span of these albums, Obscura has become known as a force to be reckoned with in the extreme metal realms, which means there’s more and more anticipation and expectations to overcome. But still, Diluvium has no problem rising to the challenge and again proving Obscura’s worth.

While the number of technical/progressive bands have skyrocketed in the last decade, one thing that has always kept Obscura at the front of the pack is not just their musical prowess, but their ability to incorporate melody. Plenty of bands can fire away technical riffs and such, but Obscura has a knack for also providing hooks for the layman fan to dig into. The playing ability is there, and is frequently something that can be considered showstopping, particularly Linus Klausenitzer’s fretless bass performance, but these songs are damn catchy (as well as diverse). “Mortification of the Vulgar Sun” readily comes to mind in this regard, switching between some faster, intricate sections and some crushing groove, not to mention some mellow moments that build into some fantastic leads. Likewise, “Emergent Evolution” sees the band firing off riffs at full-tilt, but still allowing time for some hook-based material, in both the instrumentation and increased vocoder presence. The band wisely saves its strongest moment for the end, with “An Epilogue to Infinity” seeing the band barreling ahead with both brutal aggression and a proggy undertone. This song truly speaks to what Obscura has always been, and the duality between the technical and progressive tones of their music. A fitting way to send things off as the band begins the next phase of its evolution.

An album that feels much more focused and streamlined than its two predecessors, Diluvium deftly manages to supersede expectations and deliver a thrilling conclusion to their 4-album concept. A surprisingly catchy album considering its genre, and one that many will be quick to sing some praises of when the tech-fiends start scribing their favorites of 2018.