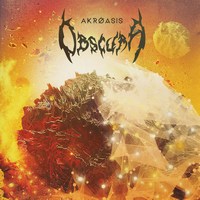 When it comes to technical death metal, one has to look towards Obscura as one of the genre’s leaders. One of the few bands instantly recognizable in the scene, their ability to play dizzyingly technical material while maintaining a sense of melody and progressive structure is practically unmatched. There had to have been a little bit of doubt in the minds of many though, as guitarist Christian Münzner and drummer Hannes Grossmann parted ways last year, leaving big shoes to fill. The greatest comfort that can be given is that Obscura is still recognizable, and have further stepped up their game with Akroasis.

Considering mainman Steffen Kummerer is the only remnant from 2011’s excellent Omnivium, it goes to show how much of Obscura’s heart and soul is in this man. Of course, the cosmic imagery and philosophical aspects of the lyrics remain intact, but the technical wow-factor still stands strong with an improved vision. With larger dynamics in place than that of Omnivium, Akroasis allows more band development and growth. Obscura has dialed back the penchant for sheer speed (don’t worry it still pops up) and in its place is more pure “song”-writing when looking from the album’s perspective. Fast, progressive, and jazz-influenced tracks such as “Sermon of the Seven Suns” and “Fractal Dimension” are just what people look to hear from Obscura, but they are balanced out by cuts like “The Monist,” with it’s space-y and even more jazzy feel, and the mid-tempo crusher “Ode to the Sun,” which also goes out with a surprisingly strong vocoder-driven clean chorus. What will be found to be the real gem though, is the 15-minute album closer “Weltseele.” Starting with some soft acoustics, it moves into more familiar territory only to shift into an orchestral interlude and some spoken word vocals. Continually morphing through the length of the song while still feeling like one track instead of a series of movements, it truly encapsulates everything Obscura is capable of and more – brutal, progressive, and dare it be said…downright beautiful.

It’s safe to say that Akroasis is the pinnacle of Obscura’s discography to date. Capturing the essence of the band while continuing to evolve and move forward into new and exciting directions, Akroasis balances risk with reward without offending long-time fans of the band. Truly forward-thinking stuff; this is why Obscura considered one of the leaders of the death metal scene.