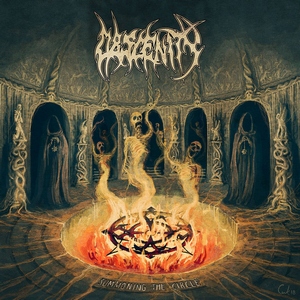 Sometimes a good taste of classic death metal is all that’s required to get the bones rattled and energized. Germany’s Obscenity have been in the thick of this sort of material for almost 30 years now and they are still just as full of fury as they have ever been. Even if they have had an injection of new blood this time around (Manuel Siewert on vocals and David Speckmann on bass) for their tenth album.

It’s hard to deny a case of pure death metal when it’s so well executed and as full of energy as Summoning the Circle is. You can tell how it is going to play out from the moment that it begins, but even with that hurtle in mind, there’s something that is bound to make you grin if you are a veteran to the genre. The riffing is often fast and frantic in nature, with harsh barks and rattling drums to back it up. Some tempo variation does help alleviate the ‘extreme metal blur’ that tends to occur (like the crushing “Invocation Obscure”), but the band’s finest asset is the way that they can weave in some melodies to the traditionally bludgeoning death metal base without souring the aggression. Opener “Used and Abused” is case in point, with a firecracking tempo but it’s super catchy. Not to mention the groovy riffs that occur when the band eases off the gas pedal for a minute, along with some impressive melodies that keep it dark but stand out. Other tracks follow suit in this same manner and lend a more than a helping hand at keeping things intense yet approachable.

Ten albums in, Obscenity are still delivering the heavy-handed death metal that anyone would expect from the band. Music that will make the blood boil will always find a way to stay relevant when bands like this are supporting the scene. Summoning the Circle is just plain entertaining.