Wednesday, 2nd May 2018 By Katarina McGinn 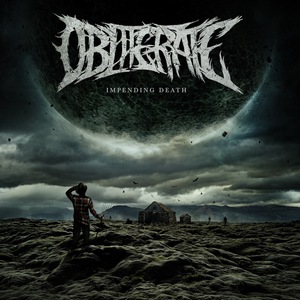 Honestly, with the track record that Unique Leader has had for signing more deathcore-ish bands over the last few years, the expectations facing Obliterate were quite low. Given the stagnant nature of most bands in the genre, as well as the perpetual need to chock songs full of breakdowns, it’s tough to warm up to some of these types of acts. But Obliterate managed to impress due to their sheer tenacity (and ability to avoid some breakdown clichés).

As with much music of this type, the biggest factor behind Obliterate’s music is just how massively heavy it is. As it should, it immediately grabs you and doesn’t let go. While the vibe is quite ‘Thy Art is Murder’ in many aspects, it’s done with a level of sheen and polish that brings it above mere copycat status. There are some rather strong melodies to be found within too, which often pop out at least once in a track and provide some atmosphere and depth (“Aneurysm” is a notable example). Songs tend to push the speed button when the band isn’t engaging in breakdown territory, which works to their favor. The faster tempos are quite frantic and quite intense, something that doesn’t necessarily go away when they do dive in for the breakdown or chugging riff. Instead, there’s plenty to play off of due to the buildup beforehand. Between the crushing atmosphere, near-constant intensity, catchy grooves, and visceral breakdowns, there’s always something to keep the listener interested, which is something that does not often happen with a more straight-forward approach.

A promising release from Obliterate, Impending Death has all the elements that a deathcore release should, and still manages to avoid sounding cliché. There’s some pure malevolence lurking below the surface, and with the adrenaline rush that the songs manage to consistently provide, it shouldn’t take much to give it a number of repeat listens. It’s pleasantly destructive, but understands that a well-rounded approach is just as beneficial.