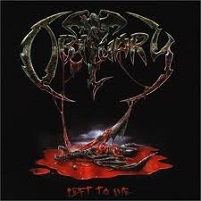 Rejuvenated after their signing with Candlelight for last year’s Xecutioner’s Return album, long-running Florida death metallers Obituary hit us with another slab of no-frills death metal in the form of the Left To Die EP. Consisting of two songs

, a Celtic Frost cover and a holdover from Xecutioner’s Return, the EP is designed a little treat to fans for their 2008 North American tour.

Starting with “Forces Realign,” it appears Obituary is content with the path they forged on the last album. Utilizing a grinding, but memorable main riff, the band slowly jolts the listener with singer

John Tardy’s legendary growl. Tardy is still the one thing that makes this band go and even when the band comes terribly close being bogged down, it is usually Tardy who pulls them out.

The cover of Celtic Frost’s “Dethroned Emperor” is solid, but comes nowhere near matching the uncaged fury of their 1990 cover of “Circle of the Tyrants.” Then again, it was CF that ultimately forged Obituary’s sound, so we’ll cut ‘em some slack for this particular cover.

Rounding out the selections is a remake of their classic “Slowly We Rot” jam, the forgettable title track and “Evil Ways” one of the better numbers of the aforementioned Xecutioner’s Return

At this point, it’s highly unlikely we’ll see another left-turn in the form of aWorld Demise, but if there’s one thing about Obituary, it’s that they are a relentless bunch and near impossible to resist. For that, they should be commended. But really, why did they have to do that damn rap song

on Back From the Dead? Unforgivable!