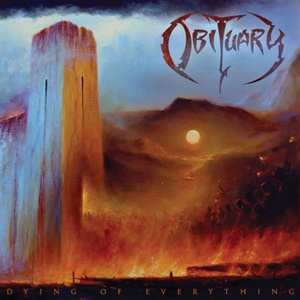 Mainstays of the original Florida death metal scene, Obituary seem to be receiving steady accolades and public buzz/interest due to a recent bio book done by the creator of this site plus strong touring slots as of late (Amon Amarth, Decibel magazine tour with Municipal Waste, Black Label Society and Prong across North America alone during 2021-22). Beyond spending downtime revisiting the early albums in a live, quarantine setting, we’ve arrived at Dying of Everything – the 11th studio album and first in six years for the group. Energetic inspiration courses through these ten paint peeling cuts, infused with that caveman tenacity and drive that makes the band one of a kind, unrivaled next to any other death unit coming down the pike.

Many may be surprised by the Donald Tardy snare blasts and frantic riffing for opener “Barely Alive” – John’s raspy, measured snarl swirling about as you’d expect, where the guitar passages, slower instrumental transitional movement, and wild lead breaks convey Slayer-esque measures put through the Obituary lens. As the record progresses you hear a mixture of the conventional hammer on nail crushing numbers like “The Wrong Time” and “Torn Apart” sitting next to speedier tracks that rip flesh from bone such as “Weaponize the Hate” and the title track. The key feel/groove aspects at all the right places ensure maximum headbanging pleasure – Trevor Peres setting up the musical platform in his crunchy, stealth-mode ways for “Without a Conscience” while the leads from Kenny Andrews possess this semi-jazzy cascading sonic atmosphere. The building intensity even at slower paces creates this power surge as the drum fills, growls, or whammy bar bends come out – “My Will To Live” another masterful pounding arrangement in this regard, while the doomy “Be Warned” becomes the ideal ender, sending listeners back through their Obituary discography for incessant playbacks.

Many wondered if death metal as a genre would last thirty years to penetrate a second (or third) generation of heavy music consumers. Obituary stride valiantly into their fifties for Dying of Everything as if they are escaping the Florida humidity, these veterans not ready to let go of the reliable mantle as dependable originators with plenty left in the tank creatively.