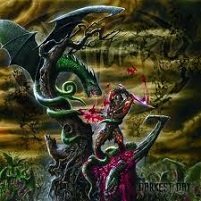 Now three albums deep into their reformation (wow…already?), legendary Floridian death metallers Obituary have come through in the clutch yet again with Darkest Day. It’s more of the same, and since Obituary has made a career out of doing the same thing since 1989 (sans World Demise – which rules, by the way), they can get away with such maneuverings. It’s Obituary. Why tinker?

The second album without long-time lead guitarist Allen West, Darkest Daybenefits from the fluid, almost too-flashy-for-Obituary leadwork of Ralph Santolla (ex Death, Iced Earth). Santolla is given plenty of room in which to shred and does so right off the bat on “List of Dead,” where his unique scale runs adds a fresh dimension to the band’s sound. Elsewhere, Santolla is magnificent on “Fields of Pain” and “Outside My Head.”

Big riffs abound of the Celtic Frost variety on “Payback,” which could be Trevor Peres’ best riff-action since The End Complete. While the Slayer-esque opening of “Your Darkest Day,” rumbling rhythms of “This Life” and the wise inclusion of two songs

from last year’s Left to Die EP (“Forces Realign” and “Left to Die”) only cement the notion that Darkest Day is another notch on Obituary’s headboard…or tombstone.

Outside of Cannibal Corpse, no Floridian death metal band has been as consistent and relevant. There’s lots of gas left in this tank…the possibilities for new, but not really new riffage must be coming out of the woodwork. Darkest Day most certainly has more variety and staying power than 2005’s Frozen In Time and 2007’s Xecutioner’s Return. Keep it coming, Obituary.