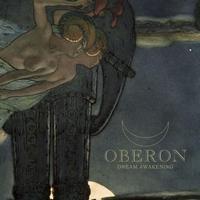 Prophecy Productions, the label responsible for the likes of Alcest, Arctic Plateau, Les Discrets, The Vision Bleak, and other dark-minded luminaries is giving one of its first bands another ‘go-round, Oberon, a avant-rock, neo-folk project consisting of lone member Bard Oberon. As the story goes, Oberon released one of the first albums on Prophecy in 1997, the band’s self-titled mini LP, and subsequently released two albums shortly thereafter, only to enter a period of prolonged absence starting in 2001. Dream Awakening, obviously, is the band’s first release in 13 years, and while it checks off a lot of the correct boxes to be a proper Prophecy release, it comes up short in the allure and mystique department.

Granted, the acclimated listener could haul Dream Awakening into the same hazy, atmospheric bin as the recent works of Alcest or Les Discrets. Bard even has much of the same quirky, artsy vocal approach like Arctic Plateau main dude Gianluca Divirgilio, although Bard’s voice has a bit more air and natural tone to it. Nevertheless, his compositions largely engage with acoustic guitars and sparse distorted guitars, with the Pink Floyd-inspired “In Dreams We Never Die” being one of the few songs with any real matter of conviction to itself along with “I Can Touch the Sun With My Heart,” a jam that is probably the best of the bunch.

The real qualm with Dream Awakening isn’t necessarily Bard Oberon’s vocals, but the lack of earth-moving dynamics. Simply, the songs here don’t cash in on the dark side as much as they should, which may (or may not) have a lot to do with the soft, flower pedal-ly vocals on display. Either way, Dream Awakening is not necessarily a miss for the always-reliable Prophecy, but it’s quite unlikely anyone is going to place this alongside some of the label’s unmistakably enthralling bands.