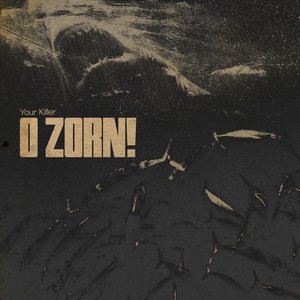 Destroyed. Demise. Death. Slain. There are so many synonyms for destruction but there’s always room for more. Enter the word “Zorn”, taken from the Lapine language of the rabbits in Watership Down. The seemingly innocent tale (cute cuddly rabbits, man), hides a hideous underbelly of treachery and harrowing tales of survival. The intent is not immediately noticeable.

Which isn’t the case for Californian sludge trio O ZORN!. When your second LP is entitled Your Killer, you better expect them to mean business. Comprised of Bill Kielty on vocals and guitars, Billy Mud on second guitar, and new drummer Danny Walker, O Zorn! set out to create a record of pure aggression where one thing holds true: The Riff is always King.

Chock full of bong-borne riffery, there’s a lot to love about Your Killer. From the title track’s lazy, head-nod inducing buzzsaw guitars, to lead single “Casket” with it’s jugular strikes and pained proclamations of “I’ll build my own casket!!”, and indeed, the whole record itself, the energy and entropy never lets up. Kielty’s raspy vocals are the perfect vehicle for the lyrics, as his voice does a great job of conveying the misery of a man who’s tired from being kicked down by the world.

As it stands, Your Killer is an amazing record from a band who deserves to be heard, adored, and loved by discerning disciples of the almighty riff.